In a tough economic climate, a working mom realtor and her stay-at-home husband must reappraise their assets, including her aging father and his new motor home; but when they take away his keys, they learn love is not a loan that can be repaid. Tender is a funny and topical drama about the debt we owe our parents, the interest we charge our children, and the price of forgiveness.

O Muse, sing of the Great Recession, and those who have fallen beneath its heel. Sing of foreclosures and bankruptcy, of microwave dinners and forced retirement. Sing of the fall of the American Dream. If contemporary financial distress had a bard, it would be Kelly Younger. The epic he has to tell isn’t a grand one, and his heroes are not larger than life. His tale is full of unpoetic words such as ‘escrow’ and ‘iCal.’ But if there’s ever a story that feels current, it’s this one. To belong also to the ‘sandwich generation’ that must care for young children and aging parents at the same time is to feel like someone dropped a two-ton weight onto that thin ice. That is the situation confronting the married couple at the center of Kelly Younger’s Tender, a compelling … drama of economic desperation … Younger’s play has its own value as a portrait of a family under extraordinary stress and the extremes that stress drives them to. … The prospect of hitting the road and heading for that roomy citadel hangs tantalizingly over all three characters, offering a chance for escape, for busting free, for redemption, or maybe for plunging through that thin ice once and for all. 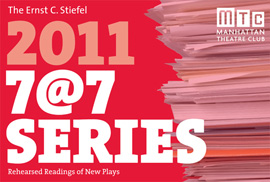 … humorous and heartbreaking … poignant and hilarious.

This World We Know