I Think You Think I Love You

Branwyn returns home exhausted from a hike where she scattered the ashes of both her dead mother and her crazy sister’s dead cat.

A knock on the door prompts Branwyn to unleash her frantic tale on Mark—a guy she thinks is there to buy her house, but is really the blind date she forgot was tonight. Once they figure out the mistaken identity, Branwyn and Mark discover the tenderness that often follows our most humiliating moments.

A comedic tour-de-force… the play was superbly crafted and often wildly funny.

– Scott Ross, The News and Observer

The published play is available below! 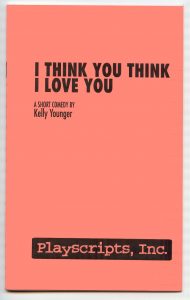 I think I know why I love it: a frantic, hilarious, self-revelatory monologue punctuated by aborted one-liners from a bewildered straight man, culminating in acute embarrassment and ending with the tenderest of epigrams. This sort of thing is not easy to pull off as a writer (although it must be mouthwatering for any actress).

This play is a gem of redirected expectations. What seems at first a farcical comedy about a raving chatterbox and a hapless stranger trapped in her doorway becomes a deeper, sadder, funnier comedy about the awkwardness of death, survival, and relationships.  And the dialogue is marvelous. This play accomplishes a lickety-split catharsis while making us laugh out loud.